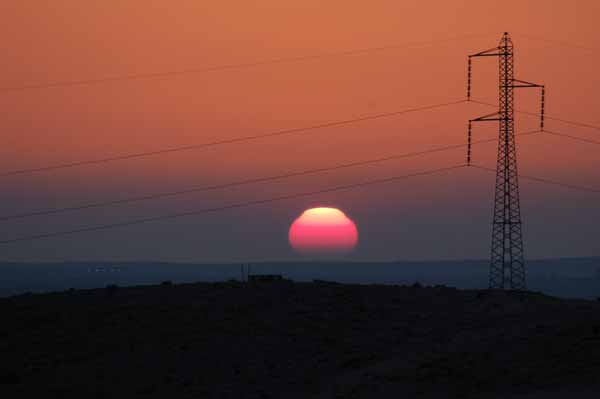 Israel Photos  A site with photos and descriptions of scenes in Israel begun in 1999.

Israel Photos II  A site with more photos and descriptions of scenes in Israel.  Includes a page about figs in Israel.

Mt. Sinai a Volcano  Satellite photos and descriptions of volcanoes in NE Saudi Arabia and the narrative of Exodus.

Early Flood Legends  Flood tablets from Nippur and elsewhere described a flood perhaps smaller than the flood of Noah and the intervention of deity to save a man and his family.

Israelite and Pre-Israelite Horned Altars  Photo and drawings depicting horned altars around the Eastern Mediterranean from as early as 1600 BC to as late as the Iron Age II of Israel (800-600 BC).

Abraham in Egypt  A page showing early Canaanites in Egypt between 1950 BC and 1850 BC close to the supposed time of Abraham.  Some inconsistencies between the Biblical and Egyptian records remain unresolved.

Gibeon  An aerial photo and brief description of the occupation layers found at Gibeon by the U. Pennsylvania expedition led by James B. Pritchard.

Joshua Conquest Theory Some of the cities Joshua was supposed to have destroyed during the Bronze Age were not occupied at the time.

Other sites by David Q. Hall include:

Israel Photos III  Includes a photos of a  giant mustard plants in Israel, discussion of the parable of the sheep and the goats, the Gospel verse about the rich man and the eye of the needle, stone water jars used for ritual cleansing such as at the wedding of Cana in the Gospel of John, cliffs at Nazareth, Capernaum, night fishing on the Sea of Galilee, the walls of Jericho not being brought down by Joshua, rolling stone tombs and the resurrection of Jesus.

Israel Photos IV  Includes descriptions of sites in Israel with text from pilgrims who traveled to Israel as early as the 19th century. Roman era Nazareth, Capernaum, Tiberias hot springs, a giant mustard plant, fishing on the Sea of Galilee before the outboard motor.

Israel Photos V  Includes photos of birds perched on mustard branches, a mustard plant over 10ft. tall, pilgrim's descriptions of wind storms on the "Sea of Galilee," photos of a precipice in downtown Nazareth, aerial photo of Magdala, and photos of Joppa with a discussion of Peter's vision in Joppa (April 2011).

Israel Photos VI  From a 2016 March trip to Israel with photos and text describing Magdala and Mary Magdalene, Tiberias theater, Nazareth Maronite Church precipice, Roman era Caesarea, Siloam, Ancient Egyptian occupation of Israel, Khirbet Qeiyafa from times of adversity between the Hebrews and Philistines, and some photos of fishing on the Sea of Galilee.

Links to more sites may found at Israel Photos III.

Revelation Controversy is a site including public domain translation from Ecclesiastical History by Eusebius, Bishop of Caesarea (c. 325 AD) inclusive of early church officials' objections to the book of Revelation.

Text or photos may be taken from my websites and used in non-profit publications. Written permission to get a license to use my photos for profit may be sought via my email address.